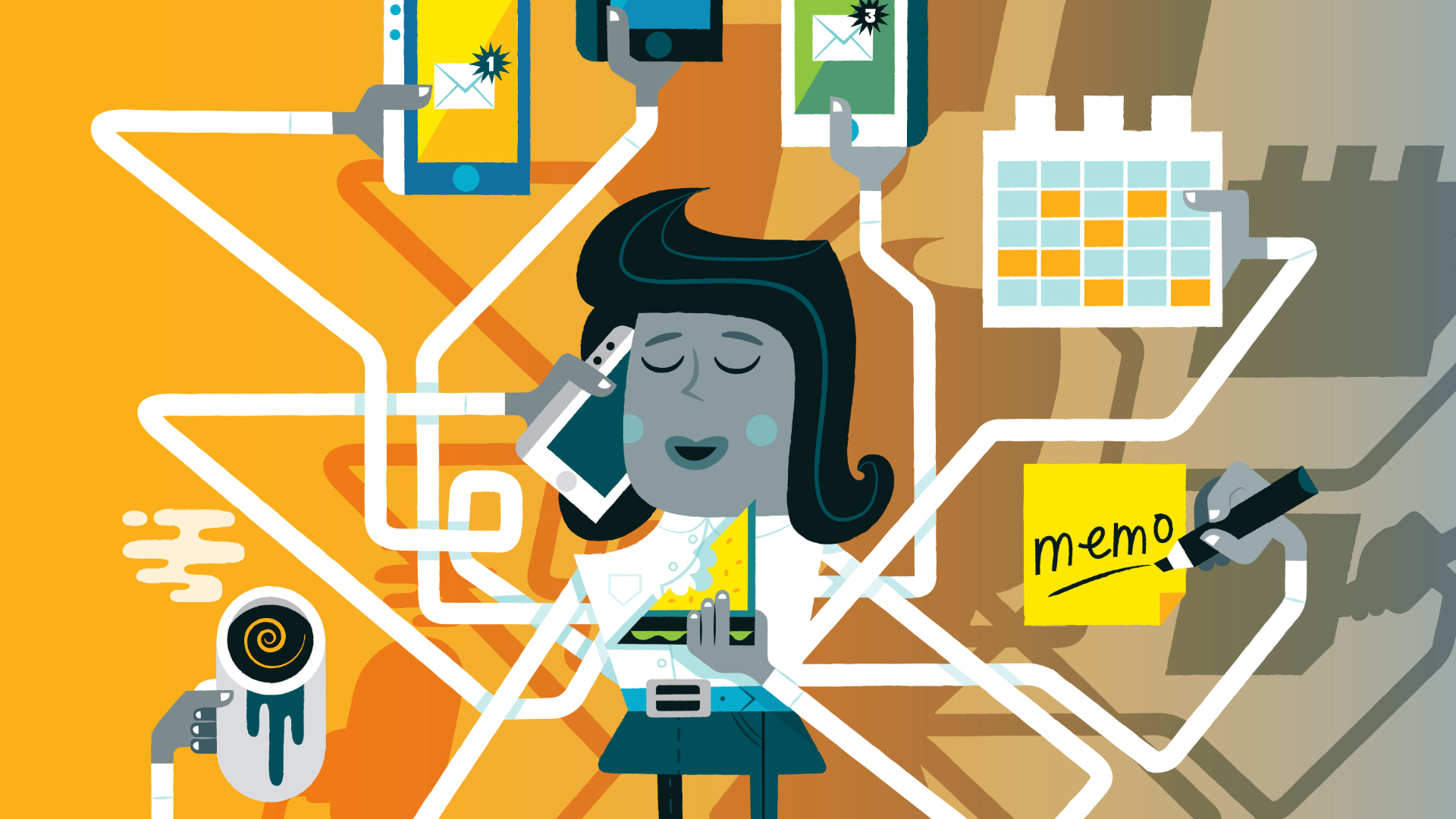 Posted at 08:08h in Reflect by Guest Author

Digital technology has become an indispensible part of our daily lives and many argue that distraction is the price of our high-tech world, but Alex Soojung-Kim Pang, author of The Distraction Addiction, says that’s wrong. He believes that we need to retake control of our relationship with technology and learn to use it in ways that allow us to be more mindful, efficient and productive.

At its simplest, distraction occurs when you should be focusing your attention on a specific task, but some other task or thought keeps you from staying focused. Now there are times when it’s perfectly fine to let your thoughts take over. In fact, our brains are well designed for mind wandering; distraction, however, is less positive.

We originally imagined that technology would make us smarter, more focused and efficient, but it seems to be doing the opposite and challenging our capacity to focus and our ability to be productive. Studies have shown that many of us check our email 50 times a day and we have around 150 interactions with our phones. Nobody designed our email to be that interesting, but human beings like novelty; we feel excited when we receive a new message and look for that kind of stimulation by constantly checking our mail.

In other cases, distraction is very much a product of design, and games and media companies like Buzzfeed have learned to design their apps and interactions in a way that captures and commoditises our attention. One very simple example is a smartphone game called Drawsome. It automatically begins a new round so there is no natural way to end the game; if you want to quit the game, you have to quit on your friends. Humans are social animals and this sort of design cue and social obligation keeps us engaged and therefore playing, whether we realise it or not.

Until very recently, we interacted with technology to do what we wanted to do; now the technology is smart and connected enough to control us.

To help or hinder

Digital distraction raises a novel and unique set of organisational challenges, and it has an impact on productivity in a couple of ways. Organisations are beginning to measure and recognise the significant costs that come with forms of digital communication like email and having to manage the constant and growing stream of communication. One study in the US showed that every email message cost an organisation roughly a dollar once the costs of labour and technology had been factored in. Likewise, the fact that it is possible to use these technologies to make work more mobile often means employees are always available to their colleagues. While in theory this should allow for a greater degree of flexibility, in reality our jobs act as a kind of steamroller that bowls over everything else in our lives and it is difficult for companies to step back and assess the effect that kind of technology-driven culture can have. When they do, they realise it is significant.

A consultancy company tried a radical experiment for them and told employees they didn’t have to answer their email one evening a week. The assumption was that clients would be annoyed. After a six-month trial period, the company found that employees felt better about their work, they were more engaged and less likely to leave, and they were more productive, not less as had been feared. And the clients? They never even noticed. It’s clear that constant communication has an effect on productivity, retention and the ability to focus. When employees feel tethered to their phones or email, it becomes harder for them to do the type of deep thinking required for working on big, complicated tasks. It can also spill over at home; we complain about teenagers texting at the dinner table but what parents tend to overlook is that teens learn this behaviour from us and digital distraction makes it harder for us to model the good behaviour necessary.

Of course there are benefits to these technologies but I think these are well rehearsed. The challenge now is about how we can use these technologies so we minimise the downsides and foster relationships that can be deep, profound and satisfying.

If we feel that we are more pressed for time even though we have more labour-saving devices, we need to understand why that is

We can learn to use smartphones, social media and computers in ways that protect our attention. If we feel that we are more pressed for time even though we have more labour-saving devices, we need to understand why that is, and ask how we can redesign those relationships so the technology helps us be more focused and mindful rather than making us perpetually distracted.

I use a term called contemplative computing, which draws on the experiences of people as diverse as Silicon Valley engineers, neuroscientists and Buddhist monks. It is defined as a method to approach information technologies in a way that is mindful and nearly effortless and that contributes to our ability to focus, be creative and be happy.

To give some simple examples of this in practice: I’ve been working with people in Silicon Valley on their ‘white list’. A black list is a list of people who are never allowed into a club or somewhere similar; a white list is a list of people who are always allowed in, and this idea can be used on your phone. You identify those people in your life who always have the right to interrupt you and set up your phone so they have one particular ringtone. The rest of the world gets silence or something very soft. So when your phone rings, you can make a simple and easy decision about whether to take the call.

One of the things I’m finding is that the more senior or powerful people are, the smaller their white lists become. I know executives whose white lists consist of one or two people. What they tell me is that they want their phones to behave the way that people at a party would behave; at a party you don’t just go up to people and start talking to them, you notice whether they are talking to someone else or if they even want to be sociable. Phones eliminate all human nuance that we spend plenty of time learning.

Studies have found that interruption is expensive in terms of both mental energy and attention. If people are interrupted, it takes between ten and fifteen minutes to become fully immersed again in what you were doing before. If your phone is more mindful, then you know instantly whether it should be interrupting you.

Likewise, people who are successful at managing email distraction tend to only check their mail a couple of times a day and they allocate certain periods for it as it’s really easy for your inbox to dictate what the next several hours of your day will be like. Set aside 30 minutes at 11am and 4pm for mail, rather than trying to deal with messages as they come in. Half of all adults check their email within five minutes of getting up but I would recommend not doing this first thing in the morning as this is when you are most productive. Checking mail automatically as a reflex means you are giving your inbox control over your attention.

So doing limited, specific and focused checks is a good way to make sure that you’re able to respond to messages, but are not overwhelmed by them.

Employers, as well as individuals, have a responsibility. They need to recognise they are over-estimating how productive employees are going to be if they are always connected versus how productive they will be if they are able to mentally step away from their phones and the office for a period of time. If the organisational culture expects employees to answer their mail immediately, they will require support.

A number of companies have jumped onto platforms like Slack (a real-time messaging platform) in an effort to cut down on email but what it tends to do is substitute one channel for another. Many have implemented rules such as not checking your mail after 6pm. Employees also need to be more thoughtful email users and recognise that sometimes it’s easier to walk down the hall and talk to someone face-to-face for 20 seconds rather than electronically.

Start-ups in Silicon Valley operate under the notion that they have two years to make it so they have to work 90-hour weeks and at the end of it, they will be billionaires. The whole industry is structured around the idea that everybody chases the dream or dies trying. Of course, this is only relevant to a small number of people, but it illustrates that it is incredibly valuable to have time to recover.

Studies have shown that giving employees time to themselves makes them much more productive than if they are always ‘on’ and thinking about their jobs. If companies want to retain people for longer than a couple of years, they need to be smart and give their employees time for recovery.

Alex Soojung-Kim Pang is a visiting scholar at Stanford University and a senior consultant at Strategic Business Insights, a Silicon Valley consulting and research firm. He is the author of The Distraction Addiction, which explores Alex’s concept of contemplative computing. He began thinking about contemplative computing while a visiting researcher in the Socio-Digital Systems Group at Microsoft Research, Cambridge. The concept is about learning to use information technologies in ways that help you be more focused and mindful, and protect you from being perpetually distracted. Alex’s next book, Rest: Why Working Less Gets More Done, will be released in December. You can find him on twitter as @askpang.